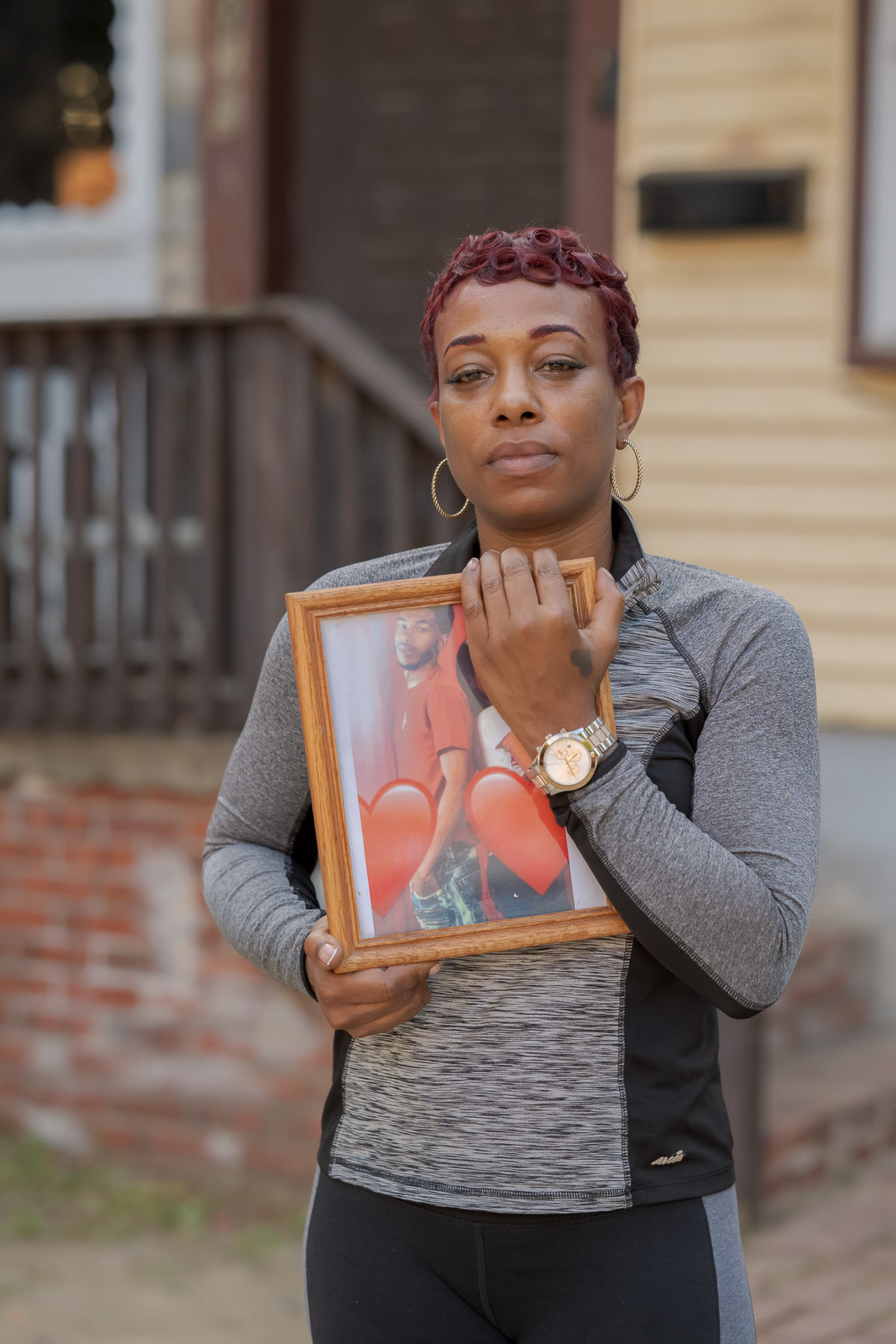 Sharee Congo, who was a victim in a Wilmington OSS raid, stands in front of her home holding a photo of her son, Armani, who was the target. Photo by David Heitur of Dream Art Studio, provided by ACLU of Delaware and used with permission

Two years ago, without warning, Operation Safe Streets raided my home, terrified my family, threw me down my stairs, and tasered, beat, and arrested my son, Armani.

Why? Because he was suspected of violating his probation.

It all started around 9 pm on October 29, 2020. I was relaxing on my front porch in Wilmington, talking with Armani, my oldest son. There had been some recent violence in our community, so I had my 9mm Beretta with me for protection — a gun that I had legally purchased a few weeks before.

Armani and I were talking about life, about how well he’d been doing in turning his life around after many years of run-ins with the law. I was so proud of him — he was working two jobs, saving up money for a car and a place of his own. He had just had two successful visits with his probation officer that week: a home visit and an office visit, and both had gone well. In that moment, life was good.

After a while, I went upstairs to make a call, and Armani followed me inside to grab a drink. And that’s when everything changed.

Minutes later, while I was upstairs and Armani was downstairs, I heard a loud boom, and then my son screamed that he’d been shot. Armani was at my door moments later with taser darts sticking out of his body. I pulled him into my room, slammed the door shut, and held it. I was terrified and confused, I had no idea who was coming after my son or why, but in that moment it felt like life or death. I was determined to do everything possible to keep my son, and the rest of my family, safe.

The following moments were some of the worst moments in my life.

While my four other children and my young granddaughter watched from different parts of the house in terror, the people who tased Armani broke through my bedroom door, slammed Armani around my room and beat him, ripped my phone out of my hand, cuffed me, threw me down the stairs, and forced Armani out of our home.

After the people broke into my bedroom, I quickly realized they were police officers, but I still had no idea why they were doing this to us. We hadn’t done anything wrong.

As they were leaving, getting ready to take Armani away, they found my gun on the front porch. I tried to tell them that it was mine, to show them my paperwork that proved it. They weren’t interested in the truth. They refused to look.

The next morning, with a swollen leg, bruises on my body, a home in shambles, and a traumatized family to comfort, I started to process what had happened. Eventually I learned who it was that had done this – it was Operation Safe Streets – but it would be a much longer time before I found out why. Armani was home by his curfew that night, he was working, he hadn’t committed any new crimes. There was no reason that he should have been targeted and treated that way.

Wilmington Police Department’s Operation Safe Streets (OSS) is a partnership between police officers and probation officers that patrols people on probation. Their extreme tactics are well known around my neighborhood, and on that night in October 2020, my family became their latest target.

[You can listen to Sharee tell her story as well as independent journalist Lauren Gill discuss the reporting on OSS for the ACLU of Delaware on the Highlands Bunker podcast.]

I finally learned why OSS officers came to my house as Armani’s hearings unfolded. Apparently, someone had given them a tip that Armani had a gun, which would have been a violation of his probation, and without any evidence, those officers used that information to tear apart my family and my home. After a two-year ordeal, with no good legal representation, my son was forced to take a plea deal and is now spending time in prison for a probation violation that he didn’t commit.

Armani didn’t have a gun. The gun that they arrested him for, and are now incarcerating him for, was mine—legally registered to and possessed by me. Armani didn’t have it, I did. And yet, OSS officers used that gun as an excuse to raid our home and throw him back in prison right when he was making good progress rebuilding his life here with his family.

The effects of that night still stick with us. For a while, my twins struggled to sleep, and my son wouldn’t go downstairs, where he witnessed what they did to Armani, for two months. I had to start taking medication to sleep. It’s still hard for me to talk about. I still have nightmares. I still hear my son’s screams for help. They traumatized our whole household and they don’t even care.

OSS shouldn’t have any authority to do the things that they do. People on probation are trying to rebuild their lives, and OSS makes it impossible for so many of them to be successful. Meeting the conditions of probation is hard enough without a secretive police force whose primary goal it is to make sure you fail.

I urge my neighbors, and all residents of Wilmington, to take a stand against Operation Safe Streets. They’re doing this harmful stuff to people, but we’re supposed to trust in them and believe in them? They’re supposed to serve and protect, but they’re not protecting anything. They’re just causing more harm. They’re tearing apart our communities, not keeping them safe. Any probation reform that happens in Delaware needs to include the shutdown of OSS.

Sharee Congo is a resident of Wilmington, Delaware. Her full story about her son’s arrest by Operation Safe Streets is available as part of the ACLU of Delaware’s new investigative story, “Operation ‘Safe’ Streets: How Delaware’s Most Secretive Police Force Plays Fast and Loose with Our Communities.” Read the full story online at ACLU-DE.org/OSS.