BMIP celebrating the success of last year including training and placing doulas, and passing of the “Momnibus” legislative package 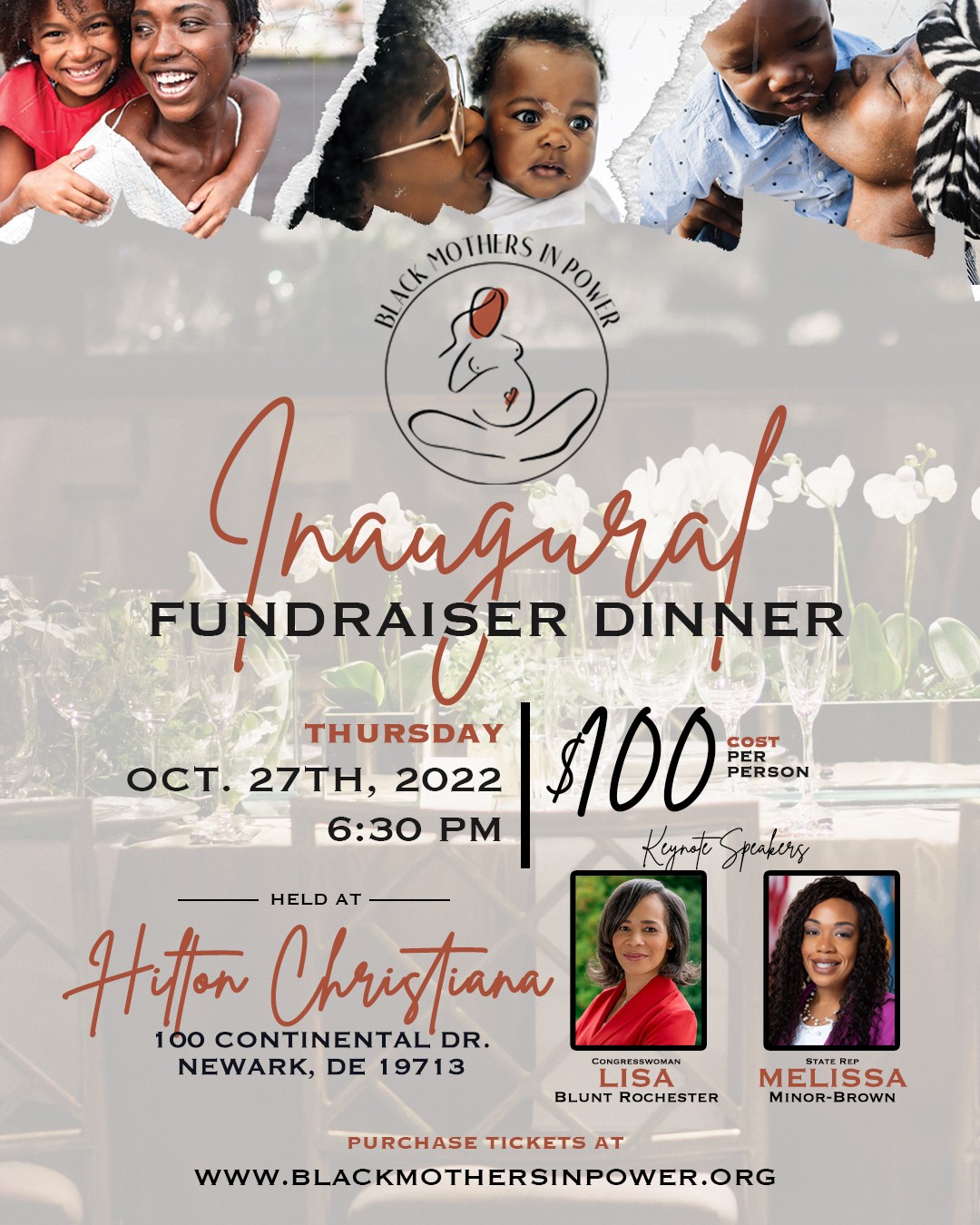 Black Mothers in Power will hold its inaugural fundraising dinner on October 27th at 6:30 p.m. at the Christiana Hilton.  Guest will include Congresswoman Lisa Blunt Rochester and State Representative Melissa Minor-Brown as keynote speakers. Led by founder Shané Darby, BMIP continues to be involved in several efforts to improve the landscape around Black maternal health in Delaware.

The project began as an issue campaign within the Network Delaware organization in October 2019 and has been growing their programs and staff since. Reflecting back on BMIP’s start and how far the organization has come, Darby shared, “I would have never thought that I would be running a non-profit.” But she had a vision for the changes she wanted to see in Delaware around Black maternal health, and that vision pushed her forward. “So learning how to run a non-profit, writing grants…developing a board [of directors], has been a lot of our focus over the last year and a half,” said Darby. “Really honing in on those things.” BMIP’s board of directors now includes five members, including Darby.

Their work is showing results. Since April of 2021, the organization has graduated their first doula cohort and received a grant through a fiscal sponsorship from the Metropolitan Wilmington Urban League to fund two additional classes. Doulas have a very long tradition supporting and guiding the child-birth process and assisting with other family health care, especially in Black communities.

Most of the doulas from the first BMIP cohort have moved into self-employment, which is the most common method of employment for doulas in the US’s healthcare system. To help bolster their graduates’ exposure and also increase access to Black birth workers in general in the state, BMIP’s website now hosts a directory that also includes midwives, obstetrician-gynecologists, community health workers, and more.

Program Manager Porsche Holland is still going strong with her work at BMIP to expand the reach of the doula program. The organization recently procured a contract with Wilmington Housing Authority, along with a small grant, to provide services to pregnant persons who live in public housing. Darby wants to see partnerships like this grow, and eventually allow BMIP to connect doulas to people facing HIV/AIDS or drug addictions.

Other initiatives the organization runs include diaper and formula drives, and their annual Black Mamas Bail Out fundraiser in partnership with Wilmington Freedom Alliance. The Bailout fundraiser is held in the month leading up to Mothers’ Day, and the money raised pays bail funds for Black mothers and femmes to enable them to be home with their children.

Darby is also excited about the recent grant the organization received from Nemours Children’s Hospital to start a postpartum support group. Through this group, BMIP is able to provide moms with a postpartum doula and a 10-week support program.

A key part of BMIP’s initiatives are their legislative partnerships. Darby has been an avid supporter of State Representative Melissa Minor-Brown’s “Momnibus” package. This package introduced eight bills, six of which were signed into law, all around supporting maternal health in general with a focus on areas that tend to affect Black people at higher rates. Darby expressed her excitement about the new legislation which calls for maternal mortality review boards, extends Medicaid coverage through the first year of postpartum, largely prevents shackling of incarcerated pregnant women from the second trimester through 13 weeks postpartum, and requires implicit bias training for all health care professionals.

Darby was most excited about the requirement for Medicaid to submit a plan by November 1st to include coverage for doula services, and creating access for incarcerated pregnant persons to access midwifery and doula services. She also hopes to see the Medicaid doula coverage requirement be extended out to all private insurers as well.

She outlined how BMIP responded to the June Supreme Court’s Dobbs decision – the decision to overturn Roe v Wade. They joined a coalition of state organizations to plan rallies and work with Attorney General Kathleen Jennings to create an abortion legal helpline. The coalition also included ACLU of Delaware, Delaware NOW (National Organization of Women), First State Abortion Fund, Southern Delaware Alliance for Racial Justice, Women’s March Sussex, and Planned Parenthood of Delaware, and they worked together to “really push that conversation about abortion access in the state,” said Darby.

Looking ahead, Darby wants BMIP to continue to be part of the conversation around continued expansion of maternal health care, including more postpartum services, Medicaid coverage of abortion, and increased contraceptive access. Darby is really excited about all that Delaware has done so far to protect abortion access, and said she would like to see an amendment to the state’s constitution to protect reproductive rights. Senator Kyle Evans Gay has introduced a constitutional amendment to ensure “personal reproductive liberty.” Constitutional amendments must be passed by two sequential General Assemblies in order to take effect.