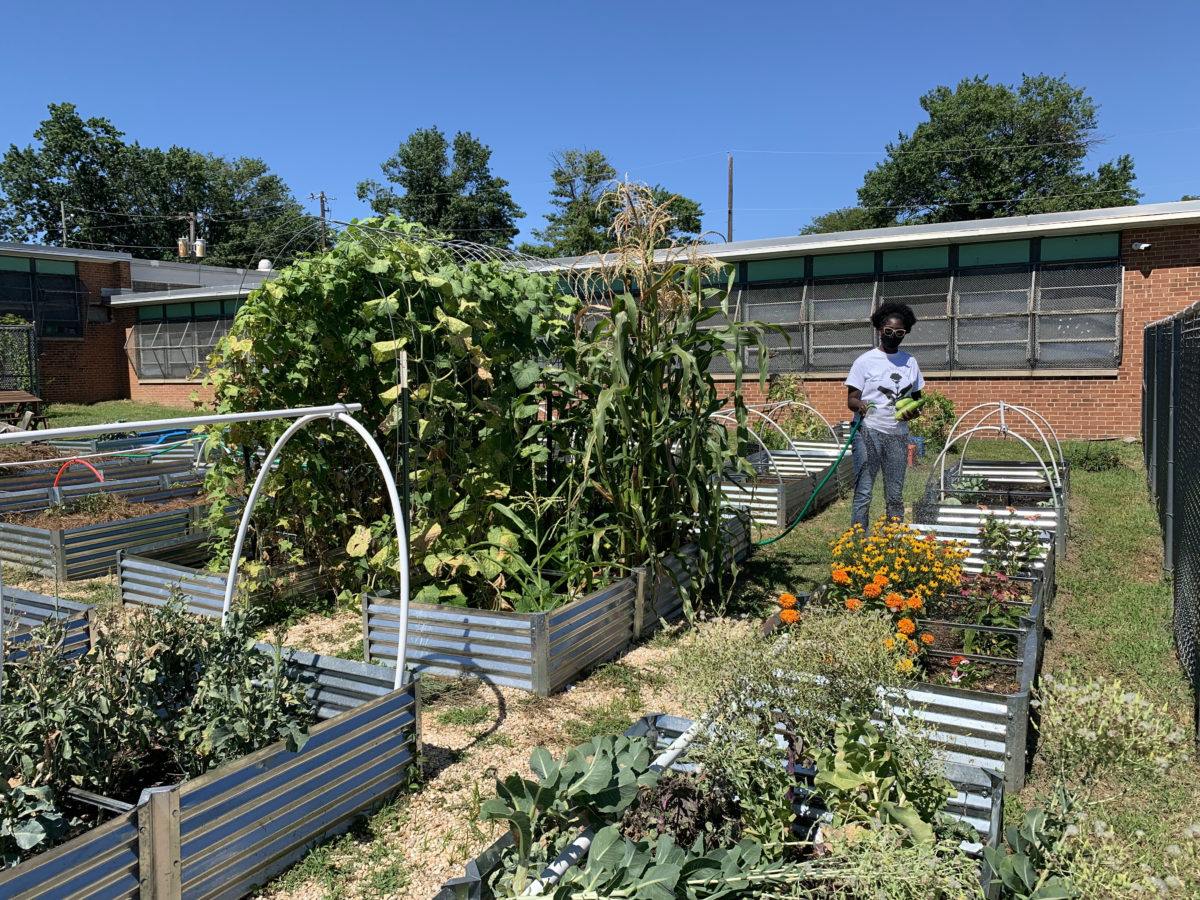 While at the Imani Village Community Day event in August at Kingswood Community Center, I saw a familiar face behind a table of fresh produce – Jessica Wescott, the founder of Planting to Feed. I had helped weed and harvest a few days at the Planting to Feed garden last summer, and it was actually one of the early inspirations for this entire series. I was inspired by the work Wescott was doing, and wanted to make sure people knew about her work and the work of so many people like her.

I tried and failed a few times to get a hold of Wescott. She admits she is hard to track down, as she has a full-time job, a family, and runs the Planting to Feed gardens and ever-growing network of community refrigerators. I knew that my best chance was joining her during her work at the garden plot behind Kingswood.

After the event, we both headed to the garden area. I held my three-year-old on one arm and my phone recorder with my other hand. Wescott walked around watering the garden plots, and we talked about what got her to this point, the help she’s had to do all the things she does, and what she’s excited about for the future.

I feel like over the last year you’ve really expanded what you’re doing, so we can just start with Planting to Feed, how that came about, and what that looks like right now?

Originally it was really to feed myself. Grocery prices were high, still are.

And when – sorry – when was this? What year?

This was 2015 I think, so we’ve been doing it for a while. I was a recent college grad, and definitely was broke. And I realized, if I don’t have money, and I have a job, somebody else is feeling the same way. So that’s really, you know, long story short, how it got started.

We started growing behind our local church first. Then we were growing in our backyards. We were feeding people meals once a month, in Wilmington, and then we moved over to our monthly meals here at Kingswood [Community Center].

Once we were here for a while, the Kingswood staff kind of asked us, like, where is the food coming from, and we explained to them that we grew the food. And from there, they asked us to come out back and they showed us a garden, and they asked us to partner with them and the folks that were already running the garden to keep it going.

Last time we talked, you mentioned you were doing the meals, and then with Covid you – is that when you moved to community fridges?

Yeah. So with Covid, we just didn’t feel comfortable, you know, putting people in a situation where it would potentially be risky. And so, last August, we started talking to our partners here at Reach Riverside about opening up a community refrigerator, and they were happy to sign on. They were our first community refrigerator here at Kingswood.

We were doing resource fairs that whole summer, but we knew that wasn’t sustainable for the wintertime, and so that’s where the community refrigerators really came in.

Yeah, so our resource fairs that we had right here at Kingswood is, we brought a bunch of partners together from different resources like narcan, mental health resources, food resources, Covid cleaning kits – you name it. It was out here for the community, and we did it in a drive through fashion. And for folks that didn’t have cars, we would walk them through, make sure they had proper gloves and masks, and got them all the resources that they need. So there was no barriers if you didn’t have a car.

That’s great. So you moved from doing those to opening the fridges?

Yeah, to sustain throughout the wintertime. We didn’t realize how successful it was going to be. We just thought, ok, we need somewhere to put our veggies, and we want to continue to provide the resources.

Shortly after the Kingswood fridge opened is when they asked us to open the teen warehouse fridge as well. So we did that for a couple of months, and then we had some folks from Henrietta Johnson Medical Center reach out to us and ask to open up another fridge, so we did. Shortly after that, just this year actually, we had someone from the YMCA who actually utilizes one of the fridges say that, hey, my neighborhood over by the Y on Walnut Street also needs it. So we just opened up another fridge a couple of months ago.

That’s awesome. You’re up to four, or five now?

We’re up to four. We’re pending a few fridges in Dover as well.

Fantastic. That’s amazing. Wait, so would you drive down there, or are you going to partner with other community gardens in that area as well?

We have some partners that will drive up here to collect the produce, as well as some farm partners.

OK cool. I might ask you for their names for the purposes of this series. [laughs]

So you have the community fridges. So tell me more about the Warehouse partnership. Because you also grow there during the winter, right? And we can walk down if you want to keep watering, that’s fine!

We walked down a few beds so Jessica could continue watering around the garden, and then resumed our conversation.

So because we’ve been working with the Warehouse, Kingswood, Reach Riverside – the whole group – they’d asked us to step in to help support their agricultural pod, which is vertical hydroponic growing. It’s a really cool opportunity where we’ve really been grateful that they even thought of us because it’s a really big deal. But essentially it allows us the opportunity to grow 365 [days per year]. And so right now, with some other partners, we are growing collard greens for the first couple of months while we make our commitment to the research portion of it. Then we’ll move on to other things we can grow. It’s really cool. It’s a really good opportunity.

So when you started, it sounds like you were kind of doing your thing on your own, and built from the ground up, so to speak. I assume you’re now a non-profit?

Yeah! So we’ve been a non-profit, I want to say since 2018. We had some folks that were like, hey, we love what you’re doing, we would love to support you, but our hands are tied because you have to be a non-profit.

I have a full time job – I work in the tech industry – so really, I was not trying to start a non-profit at the same time as working. But, you know, everything worked out as it was intended to. We started our non-profit, and that’s really helped us be able to expand our partnerships to do really cool things like this, be asked to do things like the ag-pod. You know, it helped us with our community refrigerators as well, because there’s certain laws that kind of protect non-profits. So in the end, it was totally worth it. In the beginning, it was a lot of work, [laughs], for sure.

So how many people – do you have a board and then regular volunteers too?

Yeah so we do have a pretty active board, and I’m so grateful to them, because they kind of keep my head on straight. We are fully volunteer-run. So we have – sorry if I splashed you! Probably feels good in this heat at this point – so we do have one employee who’s part-time, and she helps us stay organized. She’s been so amazing for us, because she also helps organize our volunteers. Because I have a full-time job, it was a lot. [laughs] It was a lot for me to try to manage.

Now, is this now [Kingswood] your only location? Do you still have the original ones as well, or have you moved everything here as far as growing?

So this is one of two gardens that we manage. Our other garden is right around the corner. We’ve been stricken with bindweed over there, so it takes a little bit more to get it up and running. But it is up and running. It’s right next to the Howard Young facility. So we’re really excited over there as well.

OK, yeah! What other partnerships are you working on right now, or what are you most excited about that’s coming up?

I would say the expansion of our community refrigerator project. And it doesn’t have to necessarily be us, right? We’re always willing to give people tips, tricks, and let them know how we did it. Because it’s not about us, it’s about getting food into mouths of the community. So that’s the thing that really gets me going.

And then of course events like this where we get to talk to the community, and say, hey, the 20 pounds of food on this table right now, we harvested this morning. So it really brings it full circle.

You mentioned the other garden is near the Howard Young facility. Is there any connection there, or that just happens to be the location?

It just happened to be our location. I would love to be able to do some work with those that are incarcerated there, but I’m not sure if we’re right there yet. But that would be really awesome.

Yeah. Fantastic. Well, what are good ways that people can support you?

I always say volunteer your time, talents, and dollars.

And all the emails and donation buttons are there? [laughs]

Yep, all of that’s there!

Well it was great talking with you. I’m glad I finally tracked you down! I’ve known I just need to go on a Saturday morning and weed while I interview you. [laughs]

Keep up with Planting to Feed