Community calls for New Castle Co. to release the video footage and charge the officer, among a list of demands 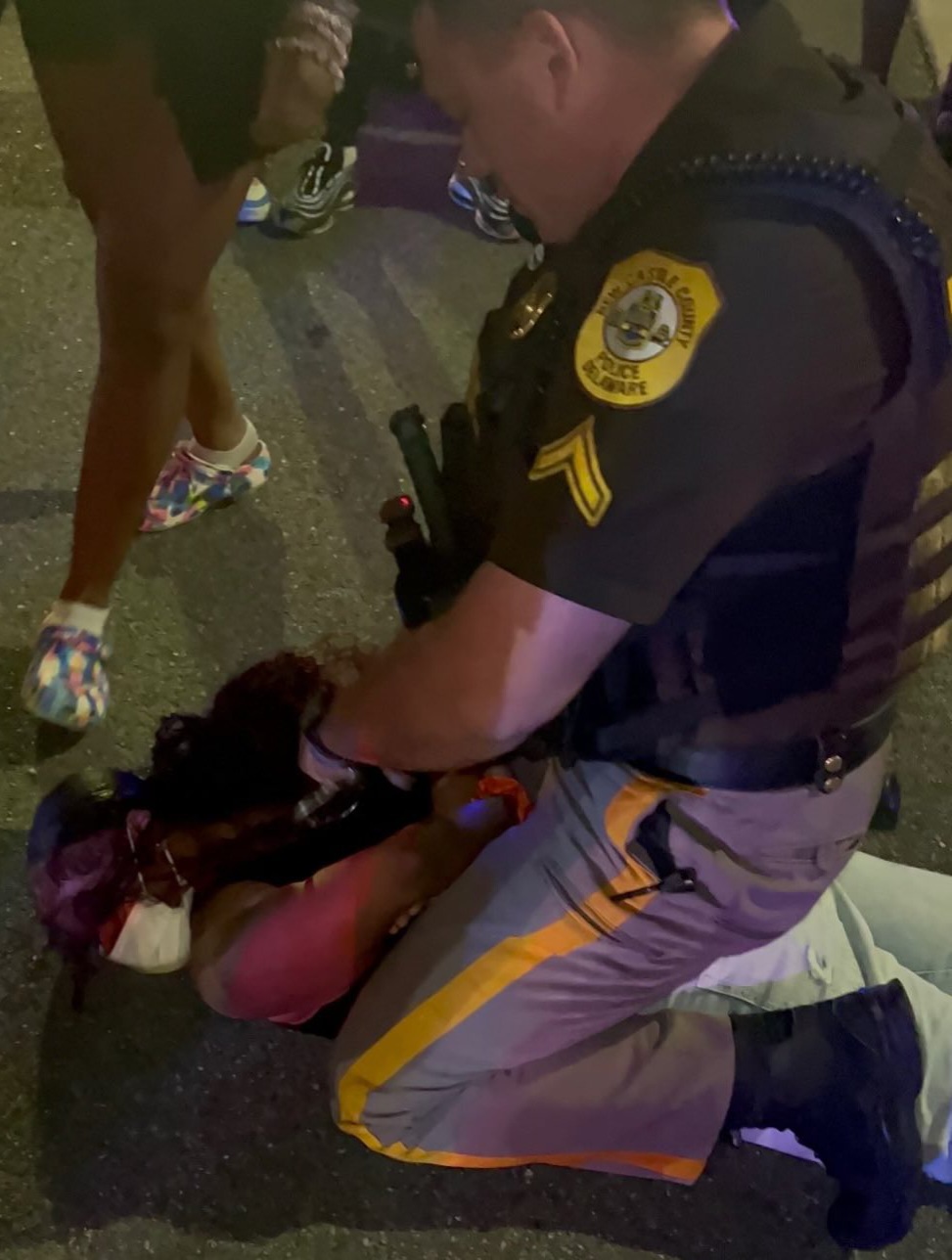 Jerrina Green, aged 17, is pinned down by a New Castle County officer | submitted and used with permission

Demonstrators gathered at the New Castle County Department of Public Safety on Tuesday to protest the police treatment of 17-year-old Jerrina Green during an incident outside a high school football game. Several of the protestors also attended the New Castle County Council meeting later that evening to give public comment.

According to bystanders and video footage taken by witnesses, Jerrina Green was arrested for being near a fight taking place in the parking lot of a Brandywine High School football game on Friday, September 16th. The arresting officer sat on Green’s back during the encounter, which Green’s family says caused a stress fracture in her spine.

Video from bystanders depicts police officers yelling at the crowd, “Get the fuck back,” and a voice yelling “not my problem” – that witnesses say was a police officer responding to friends of Green informing the officers about her artificial hip.

In the video, a large adult male officer is seen sitting on the back of Green, and a female officer pushes a bystander away saying, “she shouldn’t have been fighting.” After Green is led to a police car, bystanders can be heard telling each other, “don’t fight,” “chill,” “you know they’ll try to kill us,” and expressing confusion about why Green was “the only one” arrested.

The protestors who gathered on Tuesday insist that the police response and the ensuing chargers were excessive. According to NAACP Delaware Executive Member Coby Owens, the charges included “inciting a riot,” which is a felony under Delaware Criminal Code, and “offensive touching.”

Owens listed the five demands of the family and community; the immediate release of the police officers’ body camera footage, the dismissal of all charges against Green, naming the arresting officer and the observing officers publicly, arresting the officer who sat on Green’s back and charging him with assault, and for the federal Department of Justice to open a pattern and practice investigation into the NCCPD.

Green’s mother, Rosalyn Webb, attended the protest. It was planned for Tuesday because that was an evening she had off of work from her job at a local hospital, according to organizers. “I’m out here to get the body [camera] footage, the name of the officer, for my daughter. She couldn’t attend today because of her back. She hasn’t been to school [since the incident].”

Webb also recounted Green’s history of surgeries, with the last of her three operations occurring in 2019 to replace her hip. She said the police department called her for the first time on Monday, September 26th, and told her her daughter had not been hurt during the arrest.

“The kids stated that [Green had an artificial hip] a couple of times, and [the officer] said he didn’t care, while he was on her back,” shared Latoya Webb, Green’s aunt, who learned details from her daughter, who was present at the incident.

“I just had to sit and talk to her and explain different stuff about dealing with police situations. … Because the way [the arresting officer] responded, he was more angry than the crowd. The kids were more concerned, and as he was leading her away in handcuffs he shoved another child.”

Pastor Derrick Johnson of Joshua Harvest Church spoke about how upset he was at the lack of intervention from the other officers on the scene, including the female officer seen in the bystander video. “She says essentially, ‘This child is getting what she deserves.’”

Democratic candidate for RD13 State House of Representatives, DeShanna Neal, recounted how she explained the situation to her children. “You know what my eight-year-old son [said]? ‘Why are cops being jerks, but expect me as a little boy to know how to behave?”

A protestor yelled in response, “If they’re scared for their life, what are we?”

With a police drone buzzing over the heads of the crowd, Neal voiced her support for redirecting police budgets into community based programs, an opinion echoed by multiple speakers. At one point, the crowd lifted their signs to the sky so the police drone could see them.

Green’s aunt spoke of her concern for Green’s future, now that she has a felony charge as a minor. Under Delaware education law, felony charges can result in expulsion. It is also difficult for people with a felony charge on their record to procure a job or housing.

Rosalyn Webb explained how the police initially refused to give Green her inhaler “so she could breathe,” and when they did give her the inhaler they told her she could only take three pumps, which was not enough, according to Green. Webb was not at the game with her daughter because she was working.

Webb then read a statement from her daughter, as she could not physically attend the protest herself. The statement read, “Thank you all for coming out. I really appreciate it from the bottom of my heart. I’m so grateful. You guys didn’t have to come out here. You guys chose to. You guys could have did [sic] anything else but instead you all came out to support me, and I really deeply appreciate it, and I respect you all. God bless you guys.”

Several attendees of the rally also attended the New Castle County Council meeting later that evening (which began at 6:30 p.m. and was recorded). During open public comment, speakers reiterated the demands made by activists and speakers at the demonstration earlier.

District 4 Councilman Penrose Hollins assured public commenters they were in the right place, and asked them to keep showing up. Hollins also pointed out that while the council couldn’t take direct action on some of the commenters’ demands, they could craft a resolution to encourage action from County Executive Matt Meyer.

Also during the comments, District 10 Councilman Jea Street asked Delaware NAACP President Richard “Mouse” Smith to confirm that he had filed a request with federal Attorney General Merrick Garland on behalf of the NAACP to investigate a “pattern or practice” complaint for the NCCPD.

Smith confirmed he had done this following the death of Lymond Moses. Street further encouraged him to submit a new request including both the original letter and a new letter detailing the situation of Green’s arrest. Street also lambasted the NCCPD for claiming they were not aware Green had been hurt.

District 6 Councilman David Carter said that he is “deeply concerned” there may have been a duty for officers to intervene, per Ordinance 20-076 that he sponsored and was enacted by the County. “I would like to clarify that. I would like to have those answers.”

He shared the work he is doing to introduce an ordinance requiring the release of police body camera footage within a certain period of time when use of force occurs. “[We need to] have a really thoughtful and honest conversation on this issue. … I don’t really expect that a whole lot of the police force will be comfortable with it,” admitted Carter. “But, quite frankly, I think in order to ensure that we have credibility and public trust in our police force, we have to bite the bullet and do some of these things that are hard.”

While the NCCPD declined all comment on this matter, the Call has forwarded several general queries about how the police handle citizens who are injured during an arrest.

[Author’s disclosure: I attended this action as a participant and personally support the community’s demands. However, this article includes only reporting, and is not a personal commentary.]