When given the opportunity to pursue transformative change, the state instead opts for half-measures 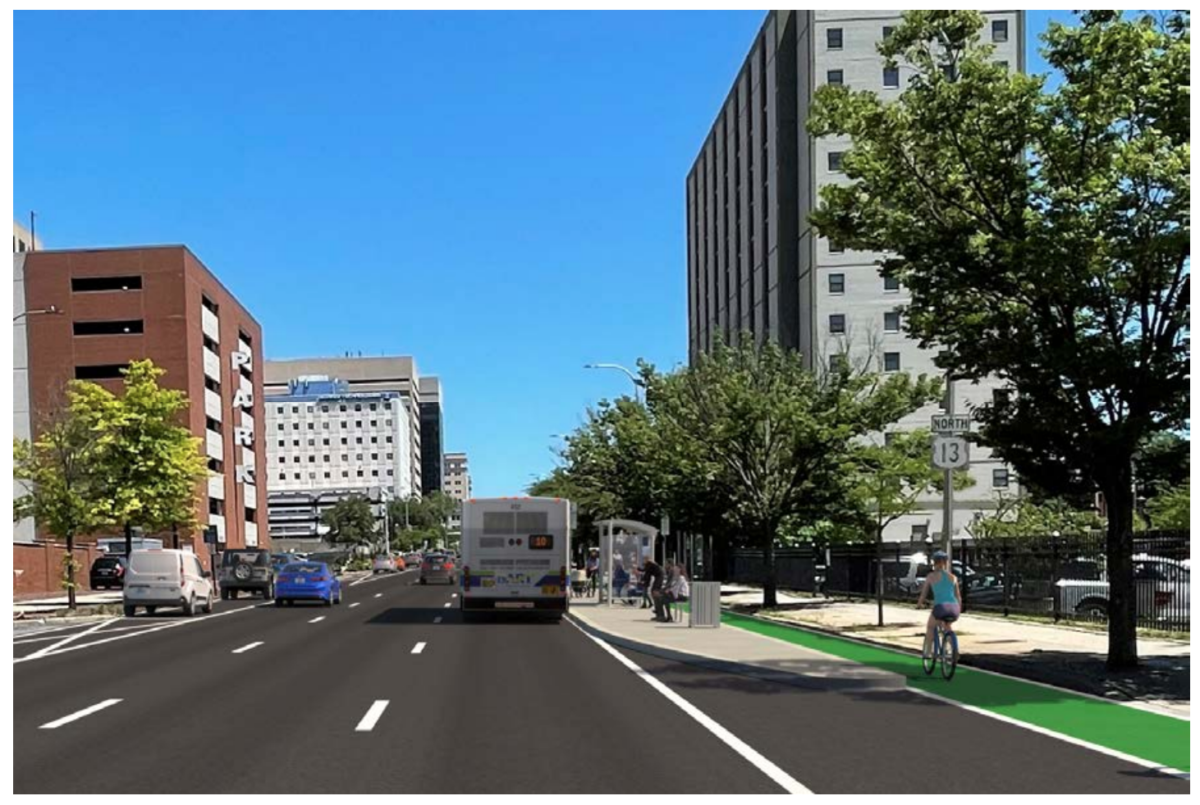 There is approximately one good thing and a whole lot of lousy things about the bike lane that is being planned for Walnut Street in Wilmington.

The one good thing is that it will be a protected bike lane and, much to the surprise of this author, not entirely a deathtrap.

But that alone is hardly cause for celebration. Plans for the Walnut Street bike lane released by the Delaware Department of Transportation are entirely inadequate for what the city needs and because of this it is unlikely to significantly induce demand for more bike ridership in Wilmington.

Why? Because the design concepts currently posted on the DelDOT website calls for a single protected bike lane approximately six feet wide starting near 3rd street and traveling northbound-only, even though the transportation center and train station are just two blocks south. In other words, this northbound-only bike lane, which will be used primarily by commuters who rely on public transit, does not afford those same commuters safe and easy access to Wilmington’s main public transit hubs.

Well, that’s not entirely true. When the Walnut Street bike lane is finished, it will quickly become obvious that people will use it to travel south to access public transit. Why wouldn’t they? The bus depot and train station are just blocks away. And not just cyclists either. This non-car, but also non-pedestrian travel lane is likely to be used by all manner of devices, from electric scooters to skateboards. All of which could be a really good thing, if only the bike lane were built to accommodate demand.

Under these circumstances, the best we can hope for is that the Walnut Street bike lane will kinda-sorta work. Riding on it will likely be chaotic and not always preferable to the street or the sidewalk. When the protected bike lane ends between 2nd and 3rd streets, people riding bikes and scooters and electric wheelchairs will haphazardly make their way to the transportation center or train station. Hopefully no one dies.

All of this makes no sense. Why invest all this time and money redesigning a roadway only to create something inadequate and clearly dangerous?

“The Walnut Street project is tying into the bike lane that stopped at 2nd Street,” Bryson said, and then acknowledged that there is nothing designating this thin strip of pavement as a bike lane. “There may be missing bike symbols on the pavement in front of the Transit Center which we can add to the current contract.”

When asked why the proposed bike lane on Walnut Street is so narrow and northbound-only, Bryson said the “project is a first step towards the completion of the Bike Plan for Wilmington,” which envisioned such a bike lane.

While encouraging that DelDOT has read the Wilmington Bike Plan, it is at best a list of suggestions, and one would hope that state traffic engineers would have the sense to anticipate drawbacks of the city’s plan and redesign infrastructure accordingly to achieve the best results.

The most obvious drawback — one that I’m surprised even needs to be mentioned — is that the Wilmington Bike Plan was completed in 2019 and the new bus transit hub adjacent to the train station opened in 2020. That alone should have prompted the state to modify plans for the Walnut Street bike lane to allow for two-way travel. Nor does the Wilmington Bike Plan incorporate the business and residential development that will soon happen along South Walnut Street when the new riverfront is built.

There’s also the Chase Fieldhouse and the Rose Bridge that connects Walnut Street to the Markell Trail.

Now is not the time for half-measures. The Walnut Street bike lane must allow for two-way travel and be at least 8 feet wide, although 10 feet would be preferable. There’s more than enough space on Walnut Street to make this relatively minor change, as some sections of roadway are more than 60 feet wide with an additional 30 feet of sidewalk space.

The ideal solution would build into consideration development that is likely to happen along South Walnut Street due to the new riverfront and repurpose a single travel lane into a two-way bike lane from the Chase Fieldhouse to 12th Street. (Even I will acknowledge that past 12th Street a one-way bike lane is probably best.)

That’s what Wilmington actually needs and is something that would induce greater demand to travel by bike (or whatever alternative means of transportation bike lanes enable). However, by now it should be obvious to anyone who’s been paying attention that DelDOT has no interest in pursuing the kind of “radical” change that would dramatically improve bike safety and begin the transition away from automobiles.