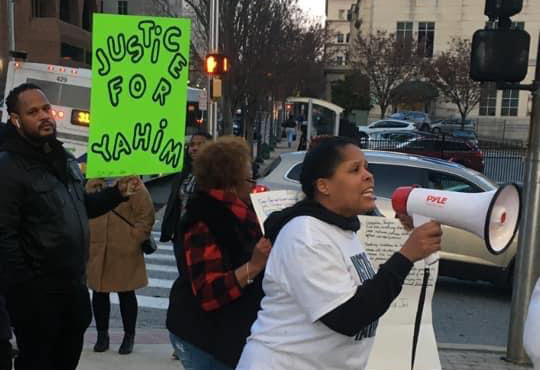 Police reform is at a critical juncture in Delaware as the state General Assembly considers SB149, a bill that was filed last year to reform the Law Enforcement Officers’ Bill of Rights (LEOBOR). Now it is rumored that the bill’s prime sponsor, state Senator Tizzy Lockman, is considering filing a substitute bill or amendments that dilute SB149’s crucial oversight measures and water the reform down to the point of uselessness.

My own experience with police brutality was in Washington, DC, when I was 17 years old and weighed just 93 pounds. Metropolitan Police arrested me while I was walking down the sidewalk enroute to a protest.

While in the custody of US Marshals inside a nearby parking garage, I refused to answer questions until I spoke to a lawyer. The Marshal who had asked me a question smiled and replied, “Good, I was hoping you’d say that.” He threw me against the concrete wall and began suffocating me by crushing my chest between the wall and the full weight of his large body. He held me in that position while 3 or 4 other Marshals took turns smashing my face into the wall and beating me in the kidney area.

After taking me to the jail they locked me in a feces-smeared holding cell. Officers told me they would transfer me to general population and let other inmates rip out my piercings and rape me. Over the course of my two-day detention, I received one meal. Police refused to give me water until a judge ordered it after I fainted in his courtroom during my hearing. That judge later released me without charges, which is so common in DC that it is referred to as being “no papered.”

No police officer was ever punished for what they did to me. One jail guard actually told me, “If you think what they’re doing to you is bad, you should see what they do to the Black and Brown kids who come through here every day.” I don’t have any reason to believe she was wrong.

While my own experience was in DC and not Delaware, I know from working on Yahim Harris’s defense team that Delaware has a terrible police accountability problem. One of the same police officers who shot and killed Jeremy McDole in 2015 was never disciplined for it. This officer shot Yahim in 2019. Wilmington Police planted a gun near that scene that they claimed was Yahim’s. The police officer who shot Yahim changed the barrel of his gun in order to destroy potential ballistic evidence.

The Delaware Department of Justice (DOJ) issued a use of force report that cleared that officer even before Yahim’s defense team had received discovery in his criminal case. Yahim was never interviewed as part of the secretive process that investigated and ultimately exonerated that officer. Neither he nor his attorneys even knew the name of the cop who shot him until the use of force report was made public.

Yahim was later cleared of all charges once his defense team received discovery. Thanks to LEOBOR protections, the DOJ carried out a secret one-sided investigation into the shooting without all of the evidence and found that the officer was justified in shooting an unarmed innocent high schooler who was running away. Yahim spent about a year in prison on pre-trial detention. The officer was allowed to return to his job as if he never shot two people.

Officer James MacColl should have never been put back on the streets after he shot Jeremy McDole, but he was cleared in that case and put back out on patrol where he shot Yahim Harris a few years later. MacColl was only charged with evidence tampering in 2021 after local activists helped Yahim’s mother get an expensive lawyer with a costly private investigator who is a former Philadelphia police officer.

Even though my experience was 20 years ago, not enough reforms have occurred in the intervening years. I have no reason to believe that anything has changed. We see glimpses of law enforcement’s violent behaviors, sadism, and casual brutality in Delaware, such as when New Castle County police needlessly and repeatedly punched 16-year-old Roger Brown on his grandmother’s lawn so viciously that they gave him a concussion. This incident was caught on camera.  The random chance these incidents are captured on video provides the only glimmer of hope that any accountability is even considered.

Yahim’s mother is my friend. Without costly legal support and a groundswell of pressure from the local Black Lives Matter movement, I know MacColl would still be on the streets. We shouldn’t need a popular uprising in order to get corrupt killer cops investigated and charged.

Survivors of police brutality and victims’ families are drawn to each other because we don’t feel supported within the system. I attended the Law Enforcement Accountability Task Force meetings where I saw police officers sabotage the process at every stage, including voting against most of the recommendations they had already agreed to in subcommittees. For a lot of survivors and families of victims, it’s not worth the PTSD flare-up for us to attend farces like that over and over again with no progress.

SB149 is not like a minimum wage bill where a compromise is still better than nothing. SB149 is the compromise. Here’s what I demand based on my own experience and the experiences of other survivors and families that I have met through my criminal justice activism over the years:

We need to divert funding away from police departments and towards our communities, especially towards our schools, which for a lot of us were the safest places we could spend our days and the only places where we could get mental health attention.

We also need to repeal LEOBOR entirely. Our neighbors in Maryland have already done so.

None of these demands are even on the table today.

SB149 is on the table. SB149 is a drastic compromise from what I believe we actually need. I strongly believe that any further compromise would be counterproductive. It would create the illusion of change while changing nothing. The only people who would benefit from a useless police reform bill are the retired-police legislators who are facing re-election in the fall.

Therefore I am calling on Senators Walsh, Mantzavinos, Gay, Hansen, Poore, Ennis, and Brown to join their Democratic colleagues who have already told Senator Lockman that they support the version of SB149 that contains what Delaware criminal justice reformers are saying is the bare minimum for the bill to be worthwhile:

If a version of that bill with all four of those points can’t be passed so be it. SB149 should go to the floor of the state Senate for a vote. Let the public see which Democratic Senators vote against it.