Some quick thinking allowed the climate message to be delivered personally. 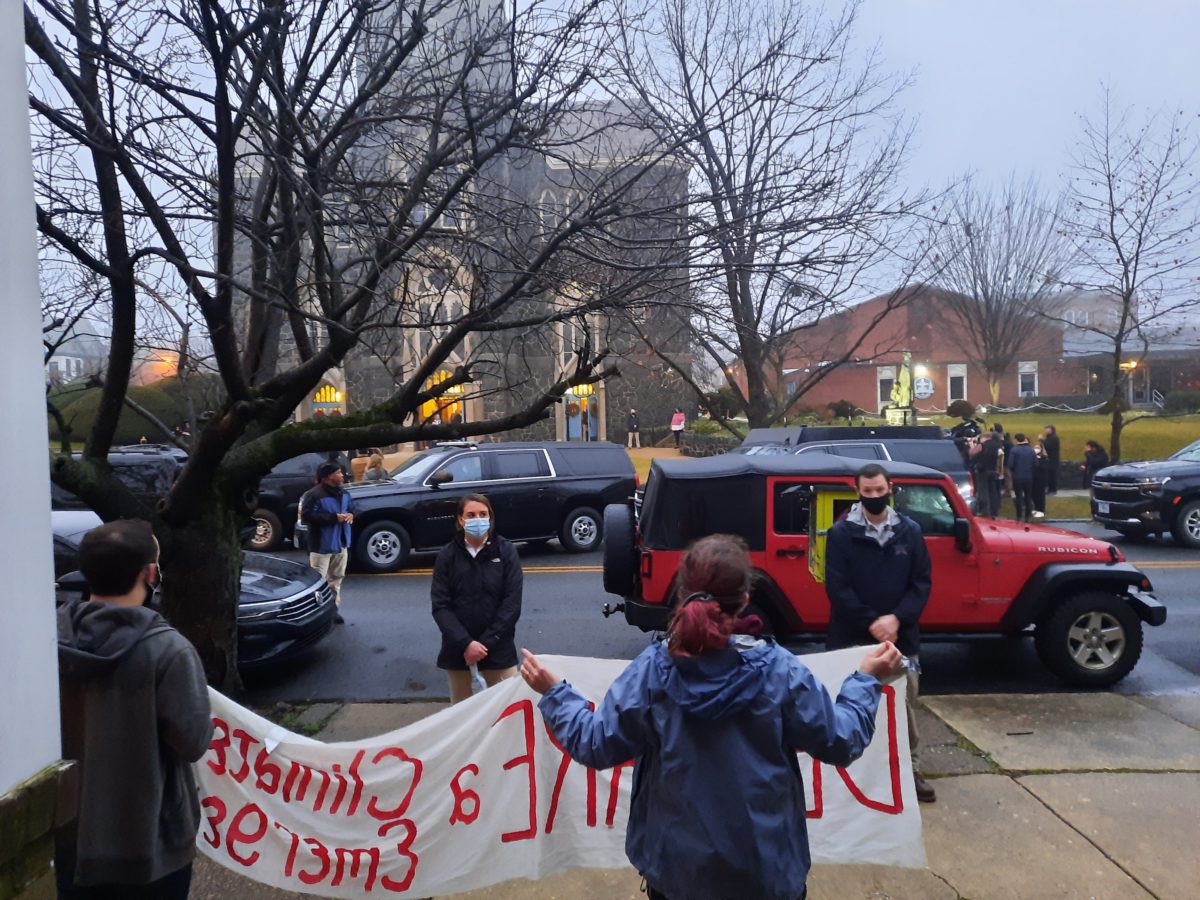 After a week of camping in Greenville, the Occupiers finally caught up with POTUS in Wilmington. R.E. Vanella, via twitter

09:55 – After a slow start to the morning, I prepared to watch the English Premier League with my good neighborhood friend.  Among our fan group this match is referred to as the Forty Acres Derby after the name of our neighborhood and the general term given to all local rivalry games.  (It’s pronounced “darby” like the Wilmington city council member, not the annual thoroughbred triple crown race in Lexington, KY.)

My friend around the corner was born and raised in Watford in the UK and is a rabid Watford F.C. supporter.  Watford hosted my club, Tottenham Hotspur.  I’ve followed Spurs since the 1980s and my friend is only 30 years old, so I enjoy reminding him that I’ve been a Spurs man since before he existed.

I ate egg on toast, downed a coffee, smoked a joint and headed out to Kieran’s for the 10 a.m. kick-off.

10:45 – Halftime nil – nil.  Normally there’s a larger group of us watching these matches.  Today only Kieran and I were up and out.  I suspect New Year’s Eve festivities had an impact on most people’s mornings.  After a few beers we split a joint and watched the second half with mimosas.  Orange juice seemed like the healthy choice.

Noon – Walked home after Colombian Davinson Sánchez headed home a Spurs winner late-on to lead Tottenham to a 1-0 victory.  I planned to sit on my couch and chill out, watch the 12:30 match, and maybe take a nap.

Scrolling through social media I noticed our comrade and Delaware Call Community Editor Rae Krantz had joined the ongoing Occupy Biden action.  In a steady rain, the protesters were marching from the occupation site to the checkpoint at on Barley Mill Road leading to the President’s home.  Rae was posting brief updates of the march and several demonstrators making statements as they blocked the street.

15:00 – While the Occupiers began to break down their encampment after the rain-soaked march (it was the final day of a seven-day occupation), social media posts, including Rae’s, reported that the presidential motorcade slipped out of the neighborhood during the lull.  Destination unknown.

15:15 – My wife, who is hanging out upstairs, calls down.  She says, “I think the president is coming to church.  There are Secret Service agents sweeping the street.”

We live directly across the street from an old Catholic church in a traditionally Irish neighborhood.  Biden has attended Mass at this church on a few previous occasions so the security preparation was something we’d seen before.

I replied on social media to Rae’s post and said I knew where the president was going.  He’s attending 4 p.m. mass at St Ann’s.  I said I would birddog it and shout at the President, ambush style, about ignoring the climate activists near his home, but thought it might not play well in my condition.  I was another bottle of wine in and had just had another smoke.  (It was New Year’s Day, don’t judge me!)

15:45 – Reflecting on it afterwards on the Highlands Bunker podcast, Coby recalls “when you [Rae] said St Ann’s, I took a second and thought, he’s going to church. Wait… that’s right down the street.”  Within a minute Coby remembered this is across the street from our house.

Coby called me to tell me activists were on their way.  Karl Stomberg, Working Families Party organizer and Highlands Bunker podcast producer, phoned a few minutes later to get on-the-ground logistics (street closures, security, parking).  By this time the block was completely shut down: Wilmington Police at both ends and the street lined with plain-clothes secret service.

I went from on the verge of a nap to absolutely buzzing in the span of 90 seconds.

16:00 –  The doors of the church were propped open and some parishioners were being patted down and a wand passed over them to detect weapons (I’m guessing).  The street was now awash in church organ music and crawling with armed officers from multiple agencies, but the president still hadn’t arrived.  A TV camera and crew was set up on the sidewalk a few houses down.  Two large black minibuses with heavily tinted windows and satellite antennae take their places in the middle of the street.

I take my wine and my pipe out to my stoop to watch the show.  A Secret Service officer across the street walks over to stand about 10 feet in front of me.  I suppose I’m a suspicious person armed with marijuana and German Riesling.

16:10 – The President of the United States arrives.  A group of SUVs park in the middle of N. Union St and Biden is shuffled into St Ann’s Roman Catholic Church.

16:30 –  The Occupier cavalry arrives on my front stoop fresh from the protest site with two large banners.  This attracts the attention of the Secret Service and the police.  A Wilmington Police supervisor asks if we plan to stand there when the president leaves the church.  We say yes.

She points to a crack in the middle of the sidewalk and says, “well over there you’re in the City of Wilmington, but here you’ve crossed into The Federal Zone.  The Secret Service has jurisdiction there.”

Two agents in khakis and windbreakers nod and one says, “and don’t throw anything.”

16:45 – Biden exits the church after Mass and is met with activists chanting and holding banners demanding action on climate and on voting rights.  After a week of cat-and-mouse games, with the motorcade taking alternative routes to avoid protesters, the message was delivered in person on New Year’s Day, in the middle of the 1800 block of N. Union St.