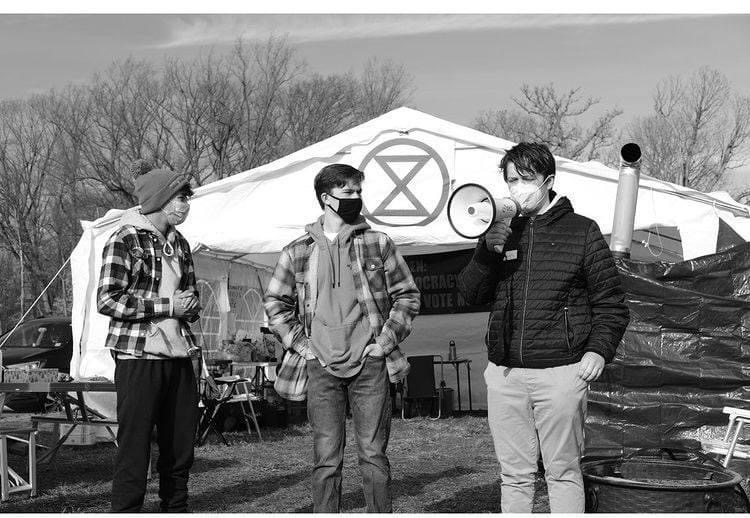 The big news yesterday was that President Biden himself arrived at his Wilmington home. He is now less than a mile away from where some of us slept last night in cars and tents, and where over 100 people have taken part so far in this action which began Christmas Day. We prepared ourselves to welcome the President with three big placard boards saying “Declare Climate Emergency” with lights shining on them.

We looked for his motorcade, but, not surprisingly, the motorcade either took the back way to get to his home on Barley Mill Road or he came in by helicopter. We will now do what we can to keep our message visible to him, or to make it something he hears about while he is here. We need people to join us whenever you can come today or tomorrow to help us do that.

Yesterday was also special because about ten teenagers came to take part in this action with us. We circled up, as we often do. We went around and everyone said who they were, why they were here, and other things they wanted to say. It is very much a way to build community, and that definitely happened yesterday.

Then we had lunch. It was delicious and nourishing food prepared by the movement catering group Seeds of Peace. Some people went by the side of the road holding up “Honk for Climate Action” signs, and others made calls to the press. Some stayed with us to take part in the evening action.

Personally, this experience has been very memorable. It’s now in its sixth day after five overnights sleeping in my car, something I have only done once before for a couple of nights 50 years ago when I was about 21.

It has also been very rainy. I think there was rain of some kind every day except one. On Monday we had snow, sleet and rain. It has been cold much of the time but not as cold as usual. Changing winters are, unfortunately, another indication of how rapidly the Earth’s climate is heating up.

That is why we’ll be here for two more days and nights and why we’ll be having a special closing gathering and action on Saturday at 1 pm to which all are invited.

Let’s act as if it is a climate emergency because it is!

Ted Glick has been a progressive activist, organizer, and writer since 1968. He was imprisoned for eleven months for his draft resistance activities during the Vietnam War. Ted is the author of several books, including “Future Hope: A Winning Strategy for a Just Society” (2000), and “Burglar for Peace: Lessons Learned in the Catholic Left's Resistance to the Vietnam War” (2020) Read more from Ted Glick.