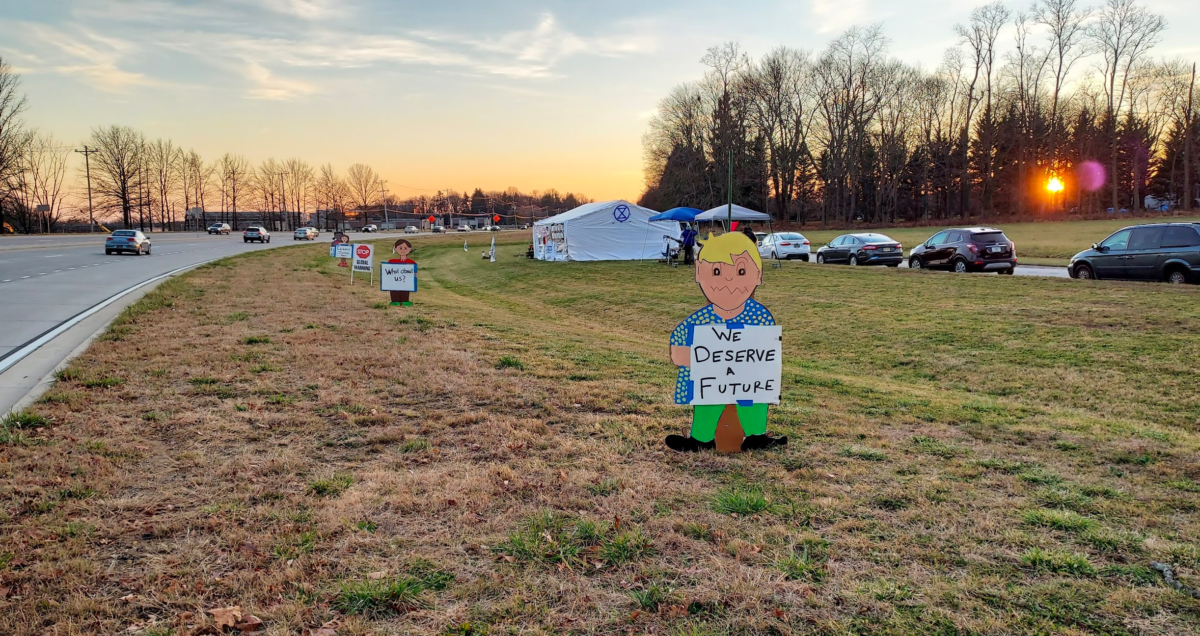 I had the shift with the best weather. It was warm and sunny when I arrived at the occupation site, and a dozen or so people were coordinating registration, supply runs, and lunch. Our goal was to get the art up as early in the day as possible, since it looks like it will rain the rest of the week.

Together we brainstormed slogans for the signs and flags. Then we took hammers, stakes, ladders, zip-ties, and duct tape and stood them up against the wind. Along the highway, cars now pass giant cardboard cutouts of children holding signs that say “CLIMATE JUSTICE NOW,” “BIDEN BE BOLD,” “WHAT ABOUT US?” and “WE DESERVE A FUTURE.”

We stood in a circle before lunch for introductions. Then sat down together to talk and drum and sing. Inside the tent, people hung their favorite protest art and projected slogans onto the wall. We swapped stories and learned more about the different groups we represented. It was nice to get to know other people who, like me, had decided to spend the day after Christmas putting up protest art along the highway.

Everyone pitched in and worked together. Leadership passed organically from person to person based on the task or situation. If we had a question, we talked about it as a group until we reached consensus. Today I witnessed the power of an organized, multigenerational movement guided by the principle that we must protect the earth for the sake of future generations.

While this week’s occupation is focused on climate justice at the federal level, it’s also important to keep the pressure on at the state and local level. In consultation with a number of progressive and environmental activists and organizations and two progressive members in the state legislature, the Delaware Chapter of the Democratic Socialists of America have developed a Green New Year’s Resolution for members of the Delaware General Assembly to endorse and to demonstrate their commitments among their fellow Delawareans and legislative colleagues. DEDSA will be presenting this Resolution at the occupation site later this week, and we are soliciting sponsoring organizations to sign on before we present it to our legislators. If your group is interested, please reach out to us at [email protected].

Kelly C. is a member of the Delaware Chapter of the Democratic Socialists of America Read more from Kelly C.