An estimated 1,000 protesters at the White House demanded voting protections and filibuster reform. 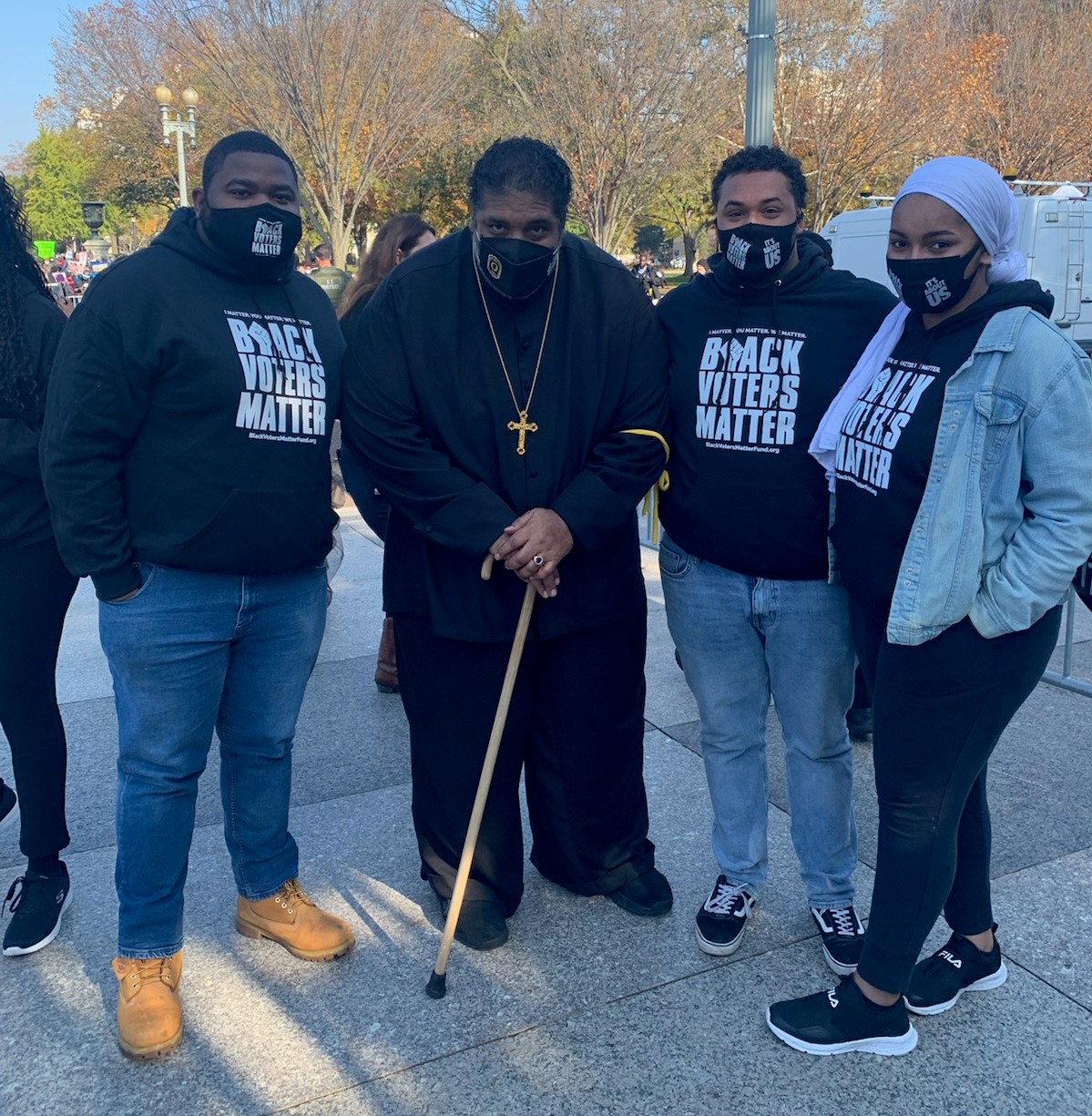 Coby Owens of Wilmington, Rev. Dr. William Barber II, leader of the Poor People's Campaign, Branden Fletcher of New Castle and Anissa Cartagena of Dover were among those arrested Wednesday at a voting rights demonstration in Washington DC.

A group of activists from Delaware joined comrades from across the country in Washington, D.C. on Wednesday to demand President Biden pressure the U.S. Senate to pass the John Lewis Voting Rights package currently held up in Congress under a threat of a Republican filibuster.

While Democrats have a one-vote edge in the evenly divided chamber (with Vice President Harris breaking any 50-50 Senate deadlock), without 60 votes to overcome a minority filibuster the legislation will not come to a final vote.

Early this month, Delaware Senator Tom Carper announced he believes the filibuster should be “no barrier” to passing the voting protection bill.  A simple majority can suspend the arcane tradition if all 50 Democrats in the Senate agree.

Carper’s office was reached by phone Wednesday and asked not only for comment on the arrest of Delaware constituents, but also to explain the specific steps being taken to circumvent the filibuster and pass the proposed bill.  As of publication, they have not provided a response.

The demonstration was organized by a broad coalition of advocacy and labor organizations including Black Voters Matter, People For the American Way (PFAW), AFL-CIO, SEIU locals, the League of Women Voters and multiple religious groups of various denominations.

Approximately 1,000 participants gathered at the national headquarters of the AFL-CIO at 10 a.m.  A march then proceeded two blocks through Black Lives Matter plaza and into Lafayette Park.

After remarks from leaders including former NAACP national president and present head of PFAW, Ben Jealous, and the leader of the Poor People’s Campaign, Rev. Dr. William Barber, around 150 protesters crossed Pennsylvania Ave and occupied a restricted portion of the street near the White House fence.

After three warnings, those near the fence in front of 1600 Pennsylvania Ave were arrested.  Rev. Dr. Barber was the first to be led away.

While symbolic arrests for civil disobedience seem routine and benign, there are always risks.  The process is often Kafkaesqe.

Federal buildings and offices are policed by various jurisdictions.  The arrest itself and the processing afterwards is not a reliable, predictable procedure.  The Capitol Police or D.C. Metro may treat activists differently depending on multiple factors that would seems bizarre to most people, like whether the action was in an office hallway, committee room, lobby or sidewalk.

In Wednesday’s case tickets were written on scene.  Those arrested waived regular criminal processing and agreed to pay a $50 fine.

The difficulty is the agency in charge of this stretch of White House fence is the U.S. Parks Department Police. As the fine must be paid in cash and in person, the 150 or so activists who traveled from out of state went to the Parks Police office immediately to settle up.

Due to lack of office staff and insufficient technology to handle to influx (as well as a widely perceived lack of urgency), the arrested were held in processing for extended periods, some eight to 10 hours.

Anissa Cartagena, 20, of Dover, was one of those detained then processed through the U.S. Parks Police.  She waited about nine hours to be processed.

Reflecting on the action afterwards Cartagena said, “I’m standing in the place where powerful women such as Mary Church Terell and Ella Baker stood to fight for an issue that should have been resolved decades ago. We are not asking for voting rights, we are demanding it.”

Several speakers lamented the fact that while this action was taking place the Congress, both House and Senate, take a recess for the Thanksgiving holiday beginning today.

Addressing the remaining activists after the event, Jealous said that the move to take action directly to the White House was a shift to make a final push on the voting rights measures through the end of the year.

He shared great optimism given the large crowd.  It’s important, he said, to show that we can “turn-up even more” protesters next time if necessary.