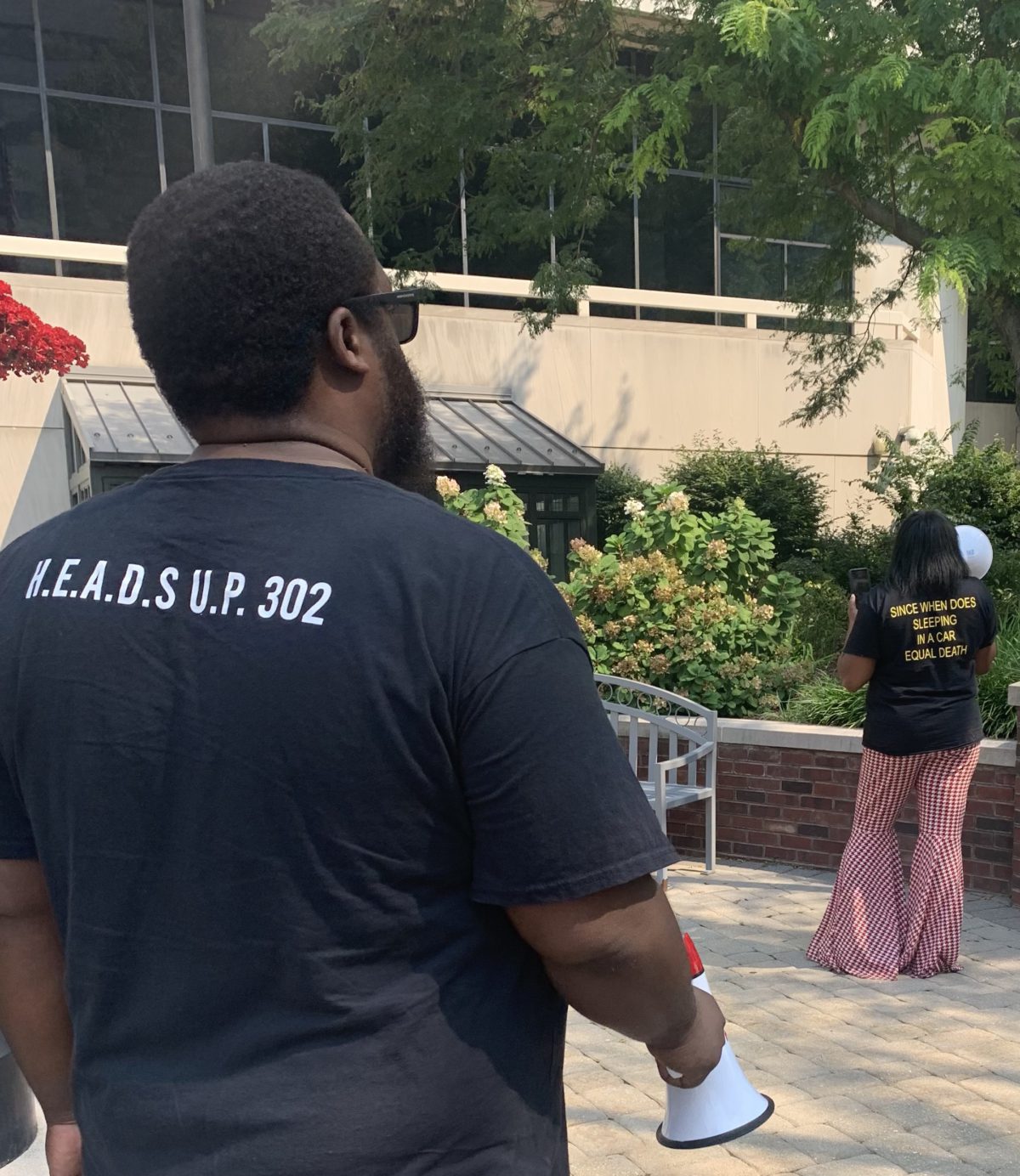 Peaceful protestors gathered in front of government office buildings in downtown Wilmington earlier this week, continuing their pleas to Attorney General Kathleen Jennings to charge the officers responsible for killing Lymond Moses. The New Castle County office building faces the Delaware Department of Justice building on North French Street, and the public walkways in front of the two gave the protestors the ideal location for their calls to action.

The group began chanting “Justice for Lymond Moses” and “Kathleen Jennings, do your job” shortly after noon. Throughout the lunch hour, individuals regularly walked between the two buildings or passed by the protestors on their way to their cars. Some reacted to the protestors with raised fists, signaling their support for the cause. Others hurried past.

Moses was killed by New Castle County police officers on January 13th of this year, and coverage of the case reached both national and international news.

Nix said she is out there because the case to investigate the officers responsible has stalled. Speaking of Attorney General Jennings, Nix said, “She sits in there with the [Legislative] Black Caucus and said she’s against what these officers are doing, yet you also sit in a seat where you have the power.” She questioned why Jennings is not using her power to move this case forward. “All we’re asking is that you charge the officers,” Nix continued. “That’s it.”

Crucial to the investigation of Moses’ case is assessing if the officers’ use of force was acceptable. There are currently statewide efforts to reshape Delaware’s police codes around use of force, with the first step in this effort being reform of the Law Enforcement Officers’ Bill Of Rights (LEOBOR). There is broad citizen support for Senate Bill 149 to enact LEOBOR reform, and the push for that bill will continue in the next legislative session of Delaware’s General Assembly.

Responding to a request for comment on both the protestors’ demands specifically and LEOBOR reform in general, the office of Attorney General Jennings said, “We cannot comment on an ongoing criminal investigation. The AG was the first state official to call for LEOBOR reform and continues to believe that it can and should get done. She has been advocating for it for more than a year now and is working to make sure that it passes the General Assembly next year. We absolutely welcome the voices of anyone who shares that goal.”

On the issue of reform, Nix shared that the protesters are seeking help from Carlton Mayers, a criminal justice advocate who has previously worked with the Heartland Alliance in Illinois and the NAACP in criminal justice reform efforts. Mayers reached out to New Castle County Executive Matt Meyer to offer his services as a consultant in reform efforts for NCCPD, Nix said, but had not received a response.

A little after 1pm, more protestors joined the group with fliers they had been handing out downtown. The group moved to the main pathway between the two buildings and took up their cries again, providing fliers to passersby who engaged with them. Most people involved in the protest wore t-shirts with messages around Moses’ case, such as “Since when does sleeping in a car equal death,” or a picture of Moses’ face.

Haneef Salaam, a Wilmington advocate, voiced his reasons for being there. “As a young Black man, I feel the same thing could happen to me. My heart skips a beat every time I see the glowing red lights. We are thankful that County Exec Meyer put out that bodycam footage so we can all see what happened. Without the footage, this likely would have already been a closed case.”

The group took occasional water breaks, and took the opportunity to talk strategy as well. Their goal is to see the officers charged. Based on the counsel they have received, they firmly believe the officers in the video acted outside of their jurisdiction, violated Moses’ 4th Amendment rights, and broke official NCCPD policy. Statements of investigators contradict the video evidence, Nix claimed.

The slow pace of this case frustrates Nix, as she sees her work as a matter of urgency. “We gotta wake people up and get this done. I don’t want another hashtag,” Nix insisted. “I don’t want this to happen to somebody else.”

Author’s disclosure: I attended this action as a participant and personally support this cause. However, this article is not a personal commentary.