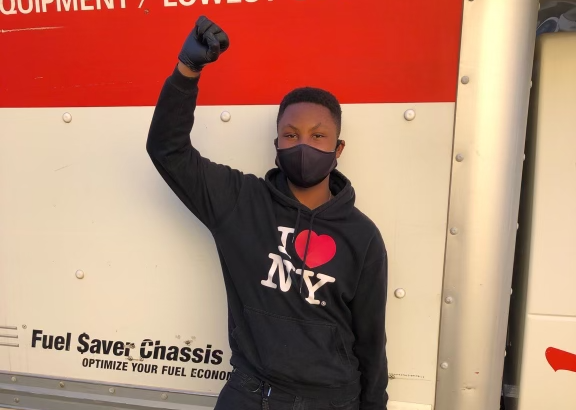 It has been more than five months since the night a Black teenager was arrested and violently assaulted by officer James Roy of the Wilmington Police Department in a galling incident caught on film by other protestors.

Ironically, the protest was aimed at drawing attention to the physically abusive nature of another of the city’s cops, officer Alex Marino. Yet despite the clear video evidence that the Black teen, who goes by the nickname Simba, was not the aggressor but rather the victim in this incident, he faces several felony charges amounting to 16 years in prison. This is no small fate to suffer for anyone, let alone a 14-year-old, and it’s baffling to the mind why he has been allowed to endure this anguish when Attorney General Kathy Jennings had already dropped the charges against 22 peaceful protestors in Camden earlier in the summer.

Giving a statement at the time regarding dropping the Camden charges, Jennings said “it’s the right thing to do.” So what is different about a single, young, Black, peaceful protestor? Especially for someone who also evoked Dr. Martin Luther King Jr.’s words in her statement regarding the Camden protestors. Why, then, has the Attorney General allowed a peaceful, civilly disobedient child to face down his entire early adulthood being wasted in jail and having this incident follow him forever after?

To get a better grasp of this case against Simba’s dumbfoundingly blatant injustice, it’s necessary to take in some crucial political context. On the night that Simba was brought into the police station following his arrest, there were conversations among Wilmington Mayor Mike Purzycki, Wilmington Police Chief Robert Tracy and the office of Attorney General Kathy Jennings about how to proceed.* In other words, after a thorough talk among these groups — each representing the most direct power and influence given their authority — all consented to the placement of three felony charges against Simba. No one involved can feign ignorance nor innocence regarding the outright injustice of this case.

In fact, the only person involved with a real claim to innocence is Simba. At, again, 14 years old, Simba is at the top of his class with a 4.0 and his school’s Black Student Union leader. Importantly, none of the case’s fundamental injustice would be any different were he not such a stellar student, but it’s the fact that he is so completely the opposite of what the charges against him suggest about his character that adds fresh levels of astonishment to this ordeal. It follows a summer’s worth of Wilmington police blocking the mall area of Market Street from all Black-led protests voicing issues faced by Wilmington’s majority-Black population, from police killings to mass incarceration. It follows a summer’s-worth of Democratic politicians, Democratic attorneys general, and liberal police chiefs (hint, hint, hint) cutting into the national conversation sparked by the murder of George Floyd to suggest that they know the right and wrong ways to protest.

Mayor Purzycki — who has claimed there were no orders for police to block Market Street from protests despite the fact they did it every single time one occurred that summer — stated himself that there should be “pushback” against the more “violent” elements of the protests, at “some point” even though it’s possible to “understand” why they’ve occurred. This came after the one lone night on May 30th when people did break some windows and set some small fires to some of the shops on Market Street. For one, this was a relatively minor scale of property destruction, but more importantly, it’s been more or less used as the hollow justification for the brazenly illegal act of the police blocking the sidewalks and road of Market Street from all subsequent protests. It seemed as though any protest would simply be disallowed to go down that way — which is, of course, a highly trafficked, highly visible, highly gentrified center of the city that’s good for getting a message out. That is, of course, unless you are a mostly white set of anti-abortion marchers. In that case, not only were they allowed to proceed down Market Street — according to witness accounts, they were led that way by police guiding their protest. It seems there is a pretty plain disparity in the way peaceful protests with different demographics and politics, yet both intended for Market Street were treated by the city, regardless of whether you personally disagree with the politics of either contingent of protestors.

So why could it be that protests put together by Black organizers, attended by Black residents and centering causes important to Wilmington’s majority-Black population were prevented every time from peacefully voicing these issues in their own city, culminating in a situation in which felonies were placed against a Black 14-year-old protestor? Perhaps we should put some focus on Wilmington Mayor Mike Purzycki, who during his tenure in the head executive position of the city’s political leadership has shut down the community television program, has prioritized investment in Market Street and the Riverfront which attract whiter residents with greater education and wealth while ignoring the crises of poverty, homelessness, and joblessness faced by the city’s Black population.

On top of overseeing these systemic issues, Purzycki has also used the dubious claim that ‘outside agitators’ were and would be responsible for destruction in Wilmington in a blatant attempt to suppress a large, peaceful protest in support of George Floyd and the rights of Black Americans not to suffer from brutal police violence. Purzycki took no discernible action during the case of Yahim Harris, a then-18-year-old Black teenager shot four times by Wilmington police officer James MacColl while running away. Purzycki refused to meet with mostly-Black protestors who, incensed by his inaction and seeming disinterest on the crucial issue of gun violence, protested outside his house for two weeks to get some acknowledgement from him on the aforementioned issue. It would seem that Mayor Purzycki has a problem of being racist, whatever his professed personal views, in allowing such instances of systemic and pinpointed harm against Black Wilmingtonians — though his personal views are called into question as well.

So too is the leadership of Wilmington Police Chief Robert Tracy, who has his own history, leaving the Chicago Police Department amid the Laquan McDonald murder controversy, as well as being an early and steadfast proponent of data-driven, statistics-informed, business-management-principle-inspired policing. At a protest in the middle of the summer demanding justice for Jeremy McDole, the unarmed paraplegic Black man shot dead by police in Wilmington in 2015, Chief Tracy even took it upon himself to personally trail the protest as they moved through some of Wilmington’s Black neighborhoods as a seemingly earnest effort to engage with the community and show them the police want to work with, not against them. Could he not then have seen that the initial fervor and size of the protests in Wilmington had swelled down into purely peaceful marches by that point in the summer? Though Chief Tracy, who left Chicago after his close friend and then-Superintendent of the force, Gary McCarthy, was finally pressured to resign, says both that he didn’t leave because of the Laquan McDonald issue and that there are constructive lessons for police to be had from it, it would seem that he is still just as unwilling to hold his institution accountable for the ruination of teenage Black life.

Finally, we turn to Officer James Roy, a newer member of the Wilmington police force and, according to his Facebook profile, a former Sergeant in the US Marine Corps. Roy was voted the Class President of his cadre in the police academy. Clearly, given his background, he is a gung-ho servant of the law both internationally and domestically. As the video proof shows, when Simba made the comment, “if I say white power, will you let me through?”, Roy decided the bold, professional course of action was to smack his bullhorn down, wrestle him to the ground and put him in handcuffs.

Is assaulting a child protestor because you personally got mad when they exercised their freedom of speech the sort of brave, stoic behavior of an experienced veteran and public servant?

But, as if that wasn’t enough, rather than hold himself accountable or be held accountable to the truth of the matter, he’s allowing the blame to be falsely put on a peaceful, innocent Black teenager. This decision is increasingly cowardly when you consider the realistic repercussion for his actions, which would be a few days suspension with pay, or desk duty, anyway.

Placing these felony charges against 14-year-old Simba is seemingly an attempt to save face for a bullish police officer’s embarrassing actions in the midst of a brazenly illegal prevention of the exercise of free speech and peaceable assembly by a small group of protestors. It could perhaps be read as a crackdown of sorts, an intentionally-made example to the nascent protest movement that brewed in Wilmington and kept up all summer in the normally-sleepy state of Delaware in response to the events preceding the summer. It is certainly the result of the trend of unchecked police behavior, corporate power and systemic racism apparent throughout America’s cities, in Wilmington as elsewhere throughout the country.

There is no truthful or productive basis for the placement of these charges against Simba, and it is both an embarrassing and revealing act having taken place in President Biden’s home state, dominated by the Democratic Party. Is this the sort of fitting behavior of ‘progressive’ politicians and officials who invoke Dr. King, and evince working together, understanding, and building trust with the Black community?

In the interest of justice and decency, these disgraceful charges against Simba must all be dropped.

*Editor’s note: A previous version of this guest commentary implied the Attorney General was personally involved in these conversations.  The Delaware Call has spoken with sources inside the police station the evening of the incident who were told Kathleen Jennings was aware of the situation.  The AG’s Office has denied that the AG herself directly participated in the discussions with the Wilmington Police Department and the Mayor.  When asked to clarify who was involved, when, in what manner, and what was discussed the AG’s spokesperson had no comment.