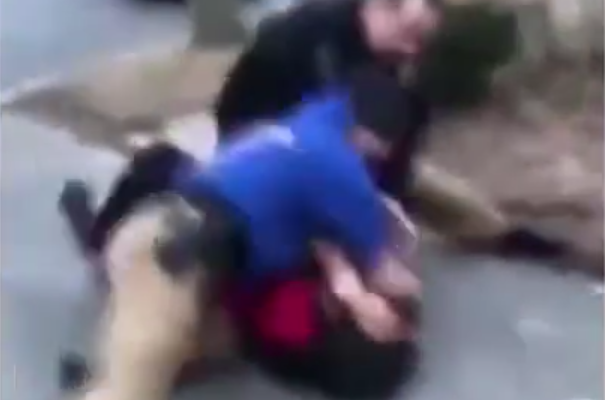 Video of an arrest by New Castle County Police, posted on Delaware Online, and picked up by other news outlets, including Newsweek, has sparked outrage. The website of the well-known British newspaper, the Daily Mail, stated, “Shocking footage has emerged of police officers punching a 16-year-old boy in the head while trying to restrain him.” Since then, New Castle County Council members passed a pair of ordinances changing police regulations over the long-winded objections of the Chief of Police, Vaughan Bond. One of the measures bans New Castle County police officers from using knee holds and from using chokeholds unless they are in danger. The other establishes a department-wide duty-to-intervene policy. I suggest additional policy changes.

1. As an agency of the government of New Castle County, the Police Department should prohibit the use of unnecessary violence, particularly towards minors.

The teenager’s mother, relying on an eyewitness account of the arrest, said her 16-year-old son was sitting astride a friend’s dirt bike in his driveway when the police arrived. They ordered him to get off the bike, which was new and had no kickstand. As he “tried to walk the bike over to lean it against a tree, police tackled him.” When the teenager’s friend begins the video, a dirt bike is lying on the ground, and two white police officers are on top of the teenager, who is lying on his back. In the video, one of the officers has his knee on or near the young man’s neck and is using one of his hands to press in on the teenager’s throat. The teen is struggling but is not striking the two officers. He is trying to push the officer’s hand away from his throat. Then one of the two officers punches the teenager hard in the face five times. The teen’s lawyer stated that this attack gave him a concussion. Here are two grown men on top of a teenager. While the teenager does not appear to be complying with whatever orders the officers gave, the reasons for that could be many. Being caught off guard and tackled as he tried to lean the bike. The choking move by one officer may have caused the teen to feel he needed to protect his ability to breathe. Finally, his youth may have meant he did not fully understand the legal requirement to comply with the orders of the police who had physically attacked him.

On March 11, 2019, Delaware Online reported, “The American Civil Liberties Union of Delaware has called for an immediate suspension of the officer involved.” ‘We await the result of the investigation, but it is difficult to imagine circumstances that justify multiple officers pinning down a 16-year-old boy and punching him repeatedly in the face,’ a statement release said. The family’s attorney said it was unreasonable and excessive force used to arrest the teen. “No matter why he was arrested, he has the right to not be beat up and punched,” attorney Chris Johnson said. “The use of force in tackling this youth in the first place was unnecessary and unprovoked and should be prohibited by Department policy, which should also prohibit punching suspects, particularly minors, especially when officers are not under attack. Pushing in on his throat is a chokehold.”

In a letter to the News Journal, prior to the new ordinances, Chief Vaughan Bond stated that chokeholds and knee-holds are “not authorized.” Yet, the Department has failed to take disciplinary action against the officer doing the choking, to the best of the public’s knowledge. Last year Chief Bond stated in a letter to The News Journal about this incident, “I can assure you that a thorough and comprehensive investigation took place that included additional video footage.” Anyone can watch the video referred to above and see the brutality against this teenager. I wondered if the next thing Chief Bond was going to say was, “Who are you going to believe, me or your own lying eyes?” Delaware Attorney General Kathy Jennings announced that the Department of Justice (DOJ) would investigate the incident. However, the results were never publicly announced. Instead, they were seemingly concealed. The only “report” was in a personal letter to the teenager’s attorney, Christofer Johnson. The letter is a shameful whitewash of the incident, making a ridiculous claim that the officer may have thought that the teenager could reach for his gun. The video shows nothing of the kind occurring.

2. Department Policy Should Prohibit Police Officers from Interfering with citizens videotaping them, which is a constitutional right of citizens.

After the officer punched the teenager, he seemed to realize he was on video. That’s when he and the other officer holding the teenager down began to repeat, “Stop resisting.” The puncher then directed a third officer to the teen’s friend, who was videotaping the incident. This third officer then walked up to the friend, put his hands in front of the camera, and ordered the teen to stop videotaping and leave. New Castle County Police should have subjected this third officer to disciplinary sanctions for interfering with the constitutional right to videotape policy and should train its officers to avoid such interference in accordance with the law. By failing to enforce the right to video their officers, the New Castle County Police Department, supposedly formed to enforce the law, has violated the law with impunity.

Certainly, the Delaware Department of Justice, under AG Jennings, ignored this violation of our constitutional rights. The DOJ letter to the teenager’s attorney, Christofer Johnson, failed to even mention that the police had no right to interfere with the videotaping of the incident (see below). The DOJ Division of Civil Rights & Public Trust conducted this so-called “investigation” which seems to be at pains to let us know it is certainly not concerned with civil rights and is not worth the public’s trust.

3. In sum, the New Castle County government should decide whether police officers are above the law that applies to everyone else or not.

This incident shows that currently, police officers are above the law and are untouchable when they abuse their power. Unlike many local jurisdictions across the United States, there are no repercussions in Delaware if police are abusive or even murderous. I call for our county government to protest vociferously if state laws interfere with the need to restrain our police officers and discipline those who are abusive of their powers. Members of the Council have suggested that state laws, including the Police Bill of Rights, prevent control of New Castle County Police. I suggest the Council pass a resolution calling for reform of said state laws. The New Castle County Police Department should not be a law unto itself.